In the wake of European exploration and settlement of the New World, waves of infectious disease decimated Native Americans. Exact numbers will never be known but many millions surely died in what was in all likelihood the worst demographic catastrophe in human history. The culprits were the many Old World diseases unintentionally brought to the New World by Europeans. Chief among these was smallpox but many other examples are known (malaria, cholera, influenza, etc.). Native Americans had no exposure to these diseases and for historical reasons were also more uniform genetically speaking that Old World peoples.

The amphibian equivalent of smallpox is playing itself out in our own times. The pathogen is a fungus called Batrachochytrium dendrobatidis (Bd for short) and it can cause a disease called chytridiomycosis in frogs, salamanders and caecilians (the three groups of living amphibians). To the best of our understanding, this is an African amphibian disease that was unintentionally transported out of Africa when African clawed frogs (Xenopus) were widely used as a human pregnancy test in the mid-20th century. Now amphibians from all over the world are being exposed to this novel disease and in many places are dying in droves. In fact, dozens of species (primarily in Australia and South and Central America) are thought to have been completely annihilated (driven to extinction) by this fungus. This is thought to be the first documented case of a pathogen causing an extinction, ever. For reasons that are just beginning to be understood, other species and other regions seem immune or less affected.

Many questions remain but in the meantime those who love amphibians are trying desperately to prevent additional extinctions by captive breeding vulnerable species and using other strategies. Unfortunately, there is no “putting the genie back in the bottle” as the fungus has been spead far and wide. This just yet one more example of how unintentional human actions can have dramatic, unanticipated  and long-lasting impacts on other life forms. 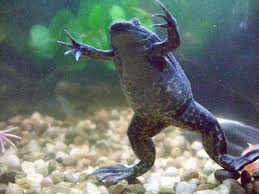